PORTULAN CLARIN is the Research Infrastructure for the Science and Technology of Language.

Its mission is to support researchers, innovators, citizen scientists, students, language professionals and users in general whose activities resort to research results from the Science and Technology of Language by means of the distribution of scientific resources, the supplying of technological support, the provision of consultancy, and the fostering of scientific dissemination.

It supports activities in all scientific and cultural domains with special relevance to those that are more directly concerned with language — whether as their immediate subject, or as an instrumental mean to address their topics —, including among others, the areas of Humanities, Arts and Social Sciences, Artificial Intelligence, Computation and Cognitive Sciences, Healthcare, Language teaching and promotion, Cultural creativity, Cultural heritage, etc.

It serves all those whose activity requires the handling and exploration of language resources, including language data and services:

The infrastructure is used when it is necessary, for example:

PORTULAN CLARIN ensures the preservation and fostering of the scientific heritage regarding the Portuguese language, supporting the preservation, promotion, distribution, sharing and reuse of language resources for this language, including text collections, lexicons, processing tools, etc.

It represents an asset of utmost importance for the technological development of the Portuguese language and to its preparation for the digital age, contributing to ensure the citizenship of its speakers in the information society.

PORTULAN CLARIN belongs to the Portuguese National Roadmap of Research Infrastructures of Strategic Relevance and is part of the international research infrastructure CLARIN ERIC.

It fosters Open Science practices by supporting its users in making their results and resources accessible to all sectors of an inquiring society.

The infrastructure pursues its mission by seeking to bring scientific, professional or personal advantages to its users by means of its operation being primarily centered on its users.

Users have free access to the infrastructure, with no registration required and without any “members only” constraint.

Users are free to choose

Users are not tracked

Users are not outrun

The infrastructure is a new type of open research organization that supports science and technology and the optimization of their resources: the infrastructure supports researchers, research centers and any other users but does not compete with its users and does not undertake research.

Users have a reliable infrastructure

The operation of the infrastructure by its users relies on a professionally run, institutional data center, hosted and maintained by the Faculty of Sciences of the University of Lisbon, and on a dedicated management team, and holds several certifications awarded by different independent evaluation organizations.

Users have a helpdesk to resort to for getting support in their utilization of the infrastructure.

Users benefit from initiatives to enhance their engagement with the infrastructure.

Users can address the infrastructure at any moment and are called to provide advice through the Scientific Advisory Forum.

June: concluded with full success the implementation project for the first phase of the PORTULAN CLARIN infrastructure, with the goals in the working plan being accomplished and surpassed.

April: collaboration with LER+ National Plan for Reading established for the reutilization of language processing tools available in the PORTULAN CLARIN infrastructure for educational purposes.

January: partnership with DefinedCrowd, an international company in the area of AI and labelled datasets, for the distribution of scientific resources established.

January: Scientific Advisory Forum established, based on the network of implementation partners and open to further contributions.

December: workshop of the network of implementation partners.

June: public event of inauguration of the PORTULAN CLARIN infrastructure temporarily postponed due to the covid-19 outbreak.

March: score "High" assigned to the maturity status of PORTULAN CLARIN in the national round of assessment of the infrastructures in the National Roadmap of Research Infrastructures of Strategic Interest, by an external committee of independent experts, appointed by FCT-Foundation for Science and Technology, of the Portuguese Ministry of Science, Technology and Higher Education.

February: the extension until at least 2023 of the membership of Portugal, and consequently of PORTULAN CLARIN, to the European infrastructure consortium CLARIN ERIC was approved by FCT-Foundation for Science and Technology, of the Portuguese Ministry of Science, Technology and Higher Education.

December: PORTULAN CLARIN teams up with ROSSIO research infrastructure for the Winter School on Digital Humanities.

December: PORTULAN CLARIN obtains from CLARIN ERIC the certification as a national centre.

November: PORTULAN CLARIN is part of the Advisory Board of the portuguese node of the RDA-Research Data Alliance

November: CLARIN European Research Infrastructure Consortium (CLARIN ERIC) is presented as on of the two highlighted use cases in the launching ceremony of the European Open Science Cloud (EOSC)

June: joint organization with AMA — Agency for the Digital Transformation of Public Administration and DGT-PT — Portuguese Language Department of the Directorate-General for Translation of the Lisbon Workshop of the European Language Resources Consortium

February: upon the definition of the regulatory framework for scientific employment being concluded by the national authorities, implementation activities of PORTULAN CLARIN intensify

November: successful application, jointly with AMA — Agency for the Digital Transformation of Public Administration and other partners, for a European project for the gathering of language resources, under the CEF program

June: grant contract for the implementation project of PORTULAN CLARIN is signed

April: joint organization with DefinedCrowd (Daniela Braga) of the audience with the Secretary of State of Science, Technology and Higher Education, Professor Fernanda Rollo, in April 10, 2017, aiming at the inclusion of the technological preparation of the Portuguese language as a chapter in the National Science and Technology Plan 2030, under preparation.

July: joint organization with DGT-PT — Portuguese Language Department of the Directorate-General for Translation of the Workshop on Corpora and Tools for Processing Corpora

July: application of CLARIN PORTULAN submitted to the national competitive call for the funding of implementation projects of research infrastructures

March: FCT — Fundação para a Ciência e Tecnologia, the Portuguese national funding agency for research, proceeds with an analysis of design and preparation maturity of the infrastructures proposed in the national Roadmap of Research Infrastructures, and PORTULAN CLARIN undergoes a most successful analysis

November: Portugal becomes the 11th member of the European distributed research infrastructure CLARIN ERIC after its request for membership being accepted by the CLARIN ERIC General Assembly

October: joint development with Camões — Institute for Cooperation and Language of the online service for the categorization of texts according to their level of proficiency

September: joint organization with Unbabel (João Graça) of the round table about the topic "Preparing the Portuguese Language for the Digital Age", in the conference "Languages: Translating the Future", which took place in Lisbon, in September 26, 2014, associated to the celebration of the European Day of Languages, and jointly promoted by the Directorate-General for Translation of the European Commission, the Assembly of the Republic (Portuguese Parliament), the Prosecutor General of Portugal and the Camões IP, Institute for Cooperation and Language of the Ministry of Foreign Affairs.

February: obtaining the top score from the evaluation committee, the application of PORTULAN CLARIN is successful and this infrastruture is an inaugural member of the first National Roadmap of Research Infrastructures of Strategic Relevance

September: application proposal of PORTULAN CLARIN is submitted to the competitive call for the roadmap of national research infrastructures, by 3 proponent partners and 19 implementation partners, including Camões IP, the national body for the promotion of the Portuguese Language

August: IILP — International Institute for the Portuguese Language, a body of CPLP endorses the application proposal of PORTULAN CLARIN

December: the international workshop “New Technologies and the Future of Languages” is organized in Lisbon by the CLARIN network for the Portuguese language

September: the CLARIN network for the Portuguese language responds to the call of interest to becoming part of the future National Roadmap of Research Infrastructures issued by FCT — Fundação para a Ciência e Tecnologia

April: the joining to CLARIN ERIC is recommended by IILP — International Institute of the Portuguese Language, a body of the international organization CPLP — The Community of Portuguese Speaking Countries

June: European preparatory project of CLARIN is successfully concluded, with the CLARIN network for the Portuguese language, with 18 members, being the largest one in CLARIN

September: after a commonly signed letter, seven Brazilian universities become members of the CLARIN network for the Portuguese language, following a positive response to their request

March: Portugal is invited to be founding member of the future CLARIN ERIC

the European language research community submits a proposal to be an inaugural member of the first European Roadmap of Research Infrastructures being designed by ESFRI, and another proposal to a competitive call in the FP7 Framework Program for projects to prepare the design of European infrastructures

Scientific knowledge is grounded on falsifiable predictions and thus its credibility and raison d'être relies on the possibility of repeating experiments and getting similar results as originally obtained and reported. Scientific knowledge is also cumulative, with more recent advancements originating from developments obtained over previous breakthroughs.

Crucial for the scientific endeavor, and for science-based activities, it is the availability of data and of companion analytical devices. Also crucial, it is the moral, and many times physical, courage to challenge the status quo, together with the altruism to share the research results.

While seeking to foster this scientific ethos, this research infrastructure is named "portulan", the term designating the maps where discoveries by courageous sailors were documented such that these discoveries and associated data could subsequently be confirmed or corrected, the originating travel could be repeated with increased efficiency, and new discoveries and routes could be reached beyond those already known. 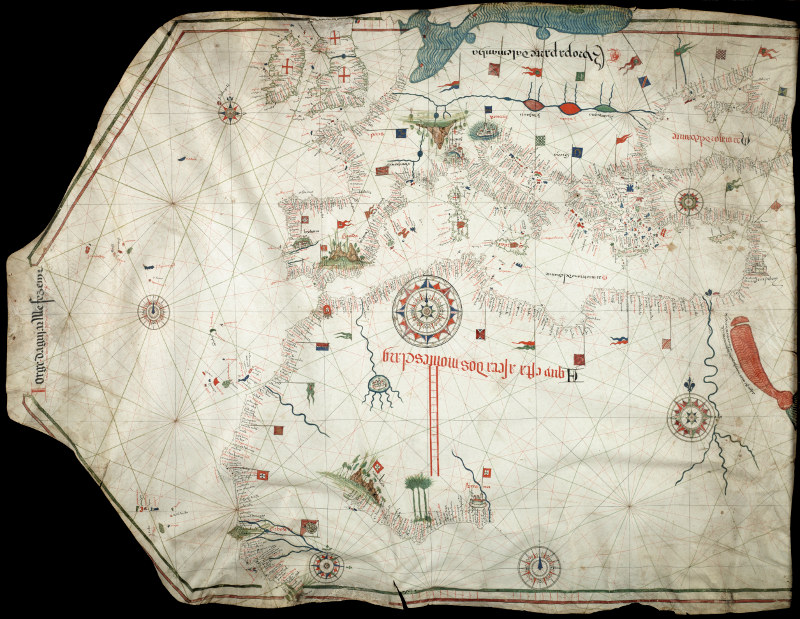 If you are interested to know more about portulan maps, you can start here.

This site saves small pieces of text information (cookies) on your device to enhance user experience. You can disable cookies by changing the settings of your browser. By browsing this website you accept to store that information on your device. Dismiss